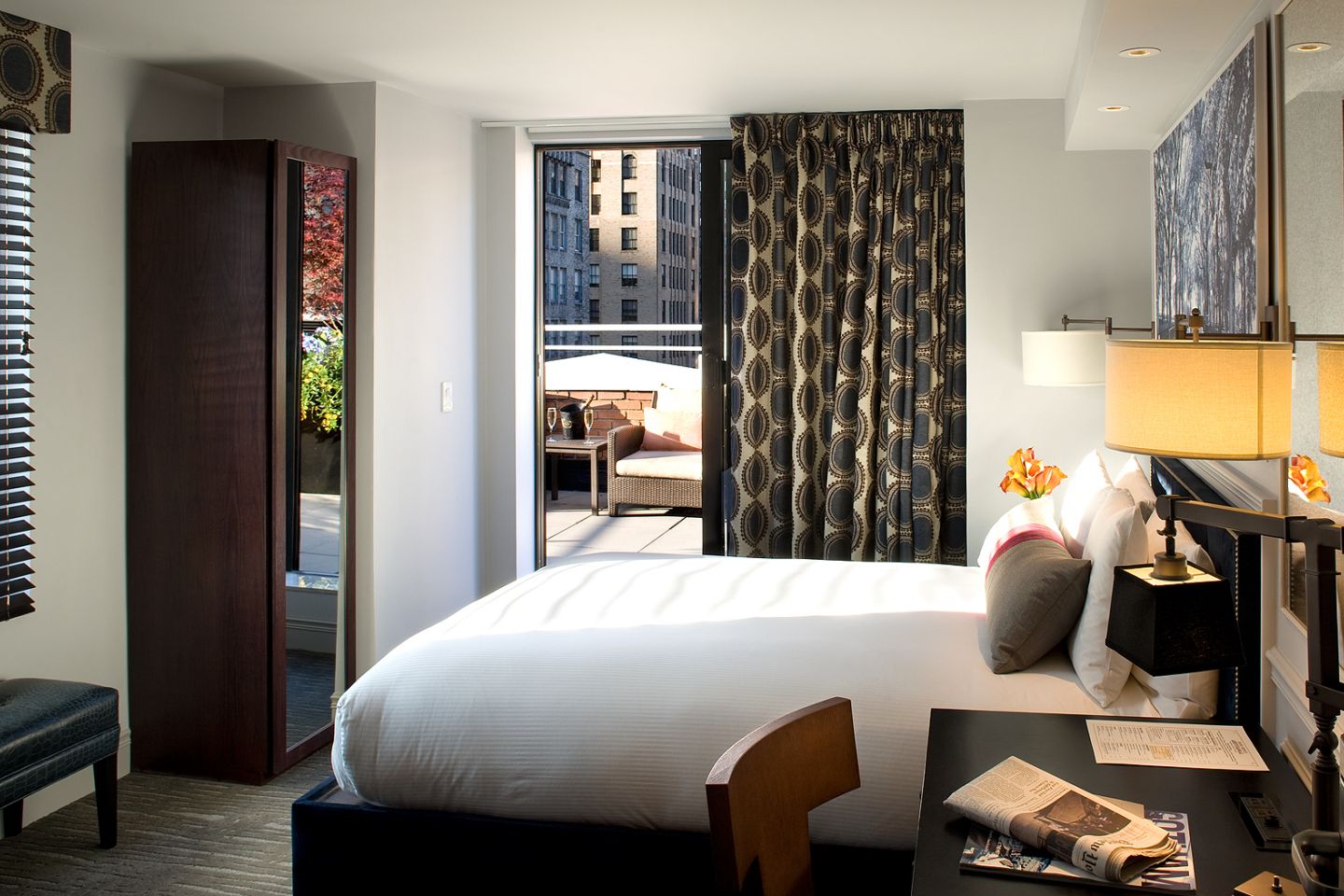 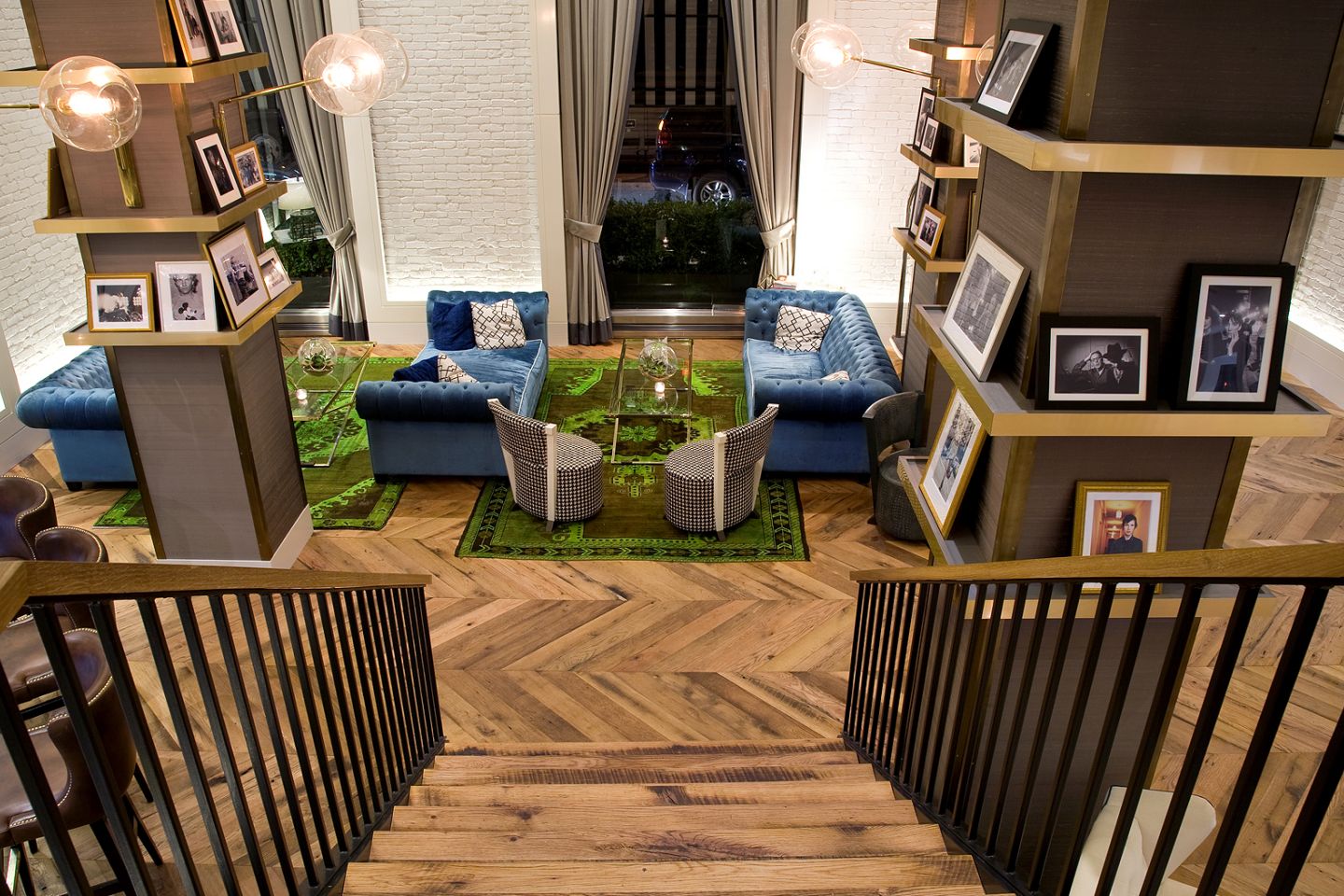 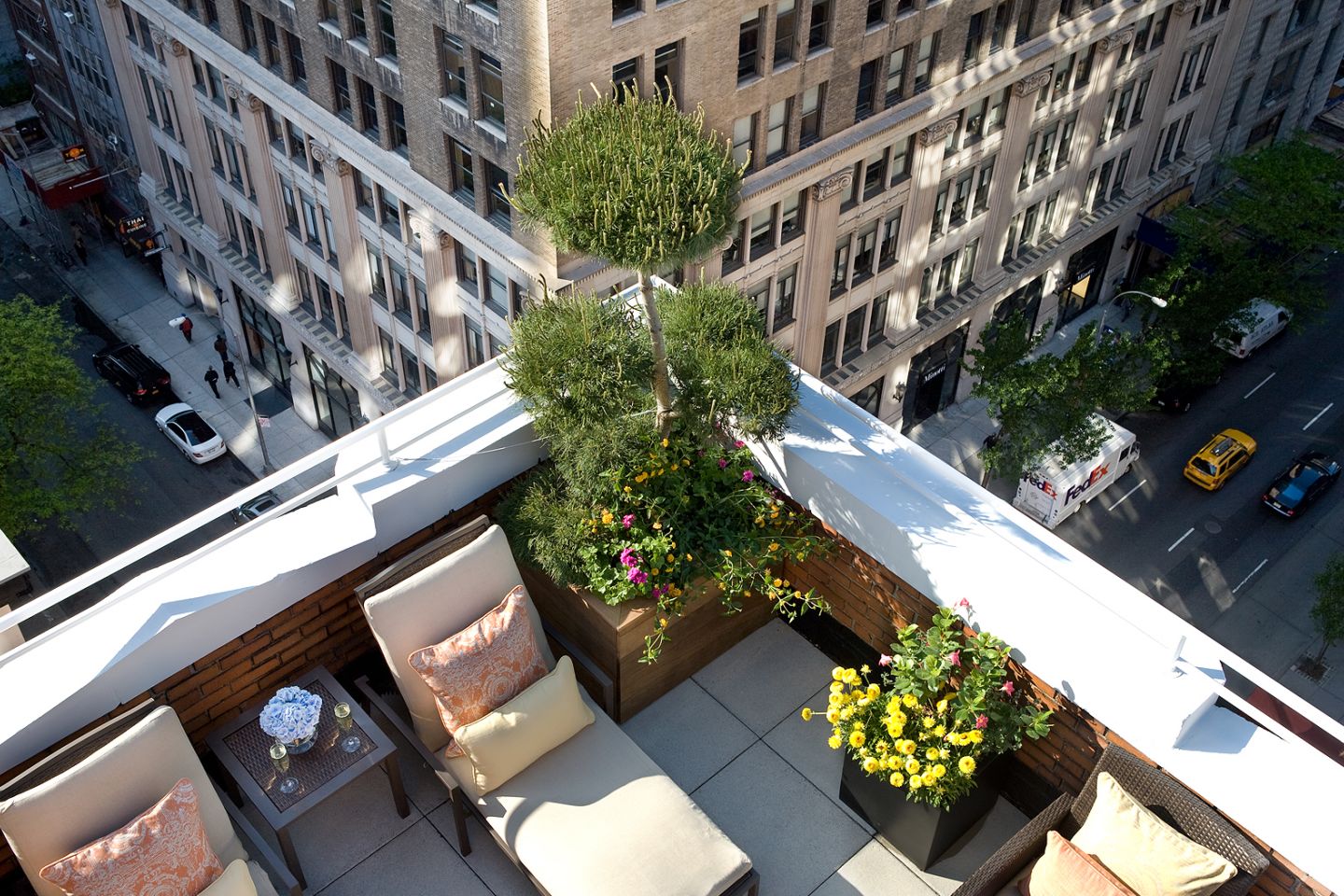 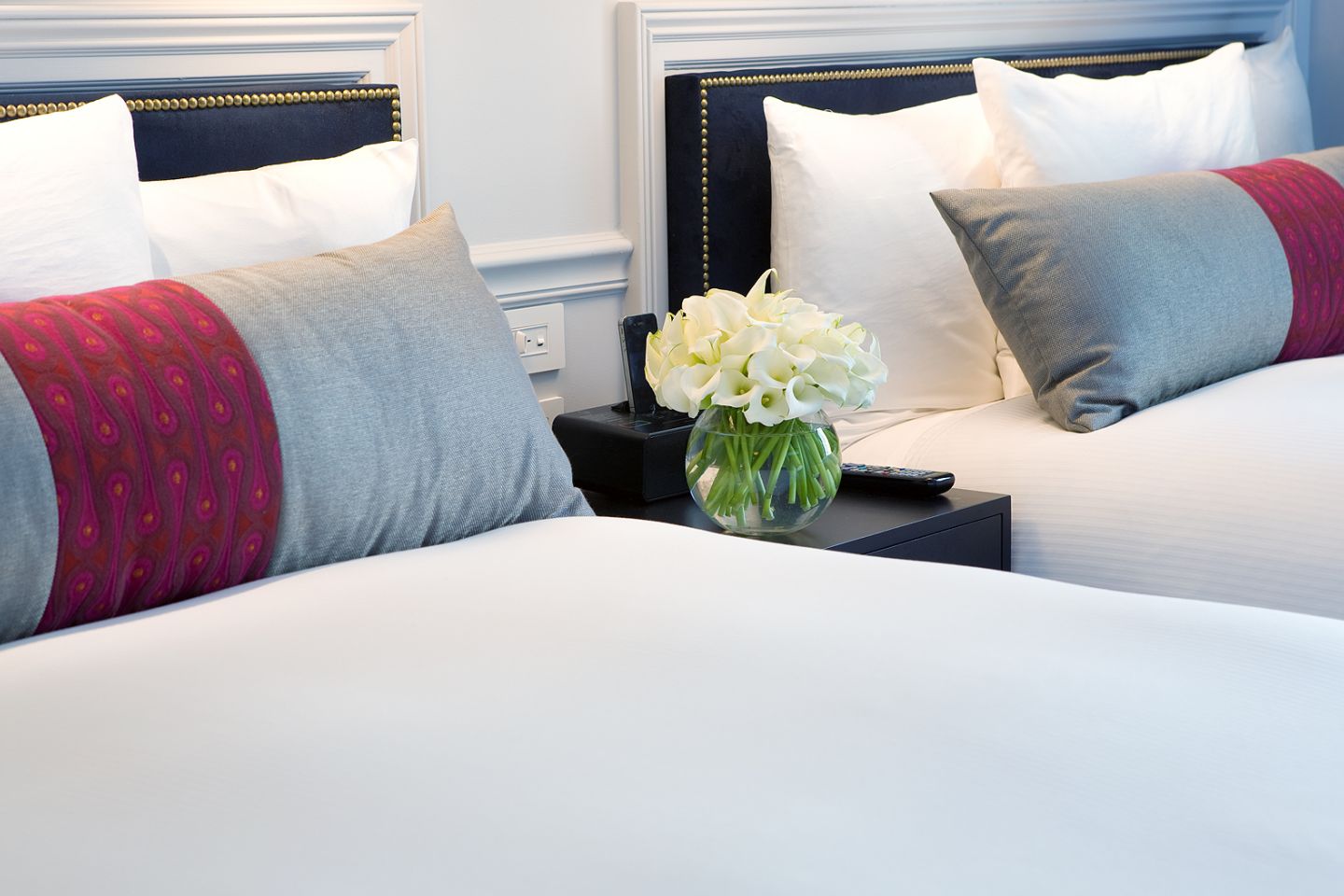 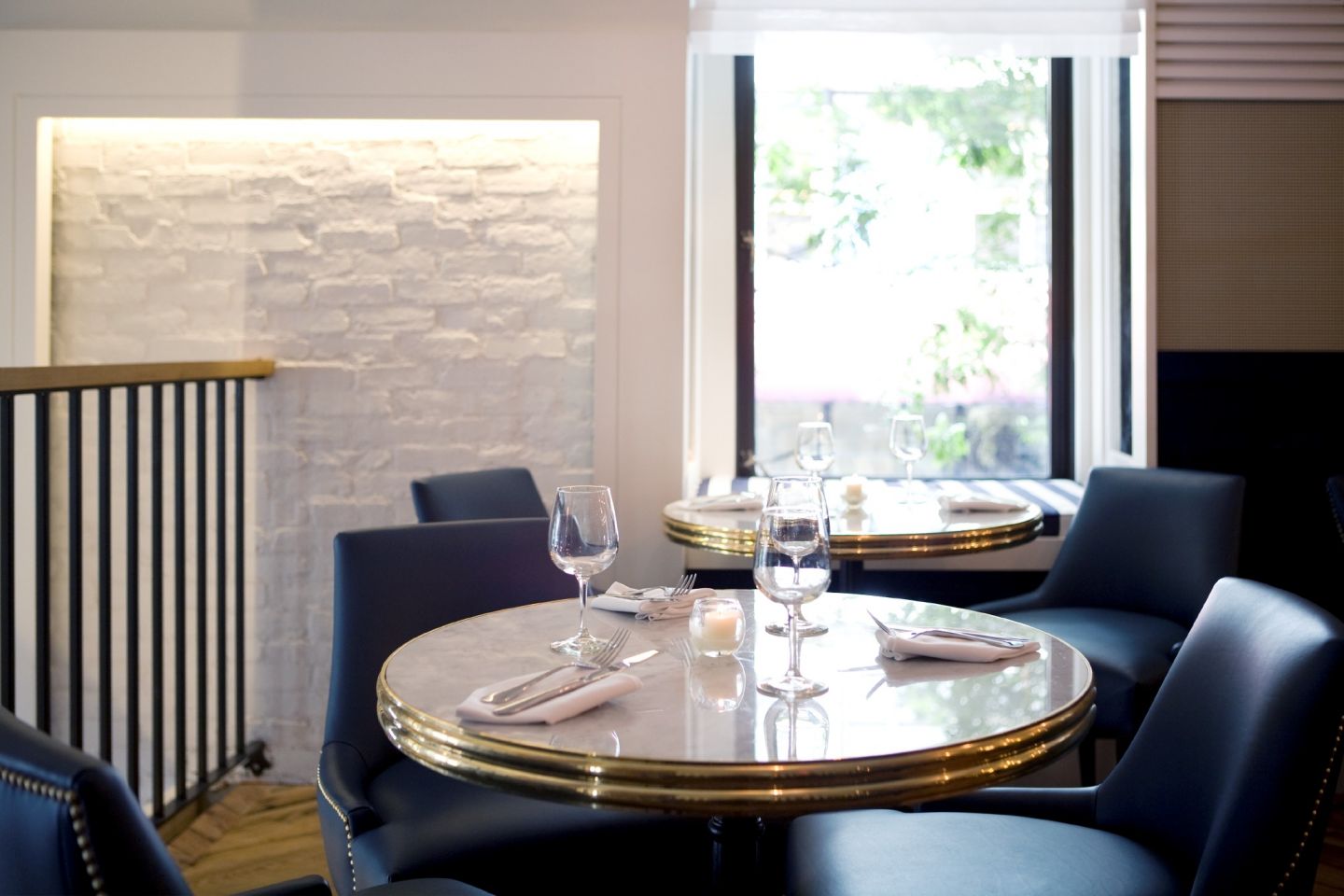 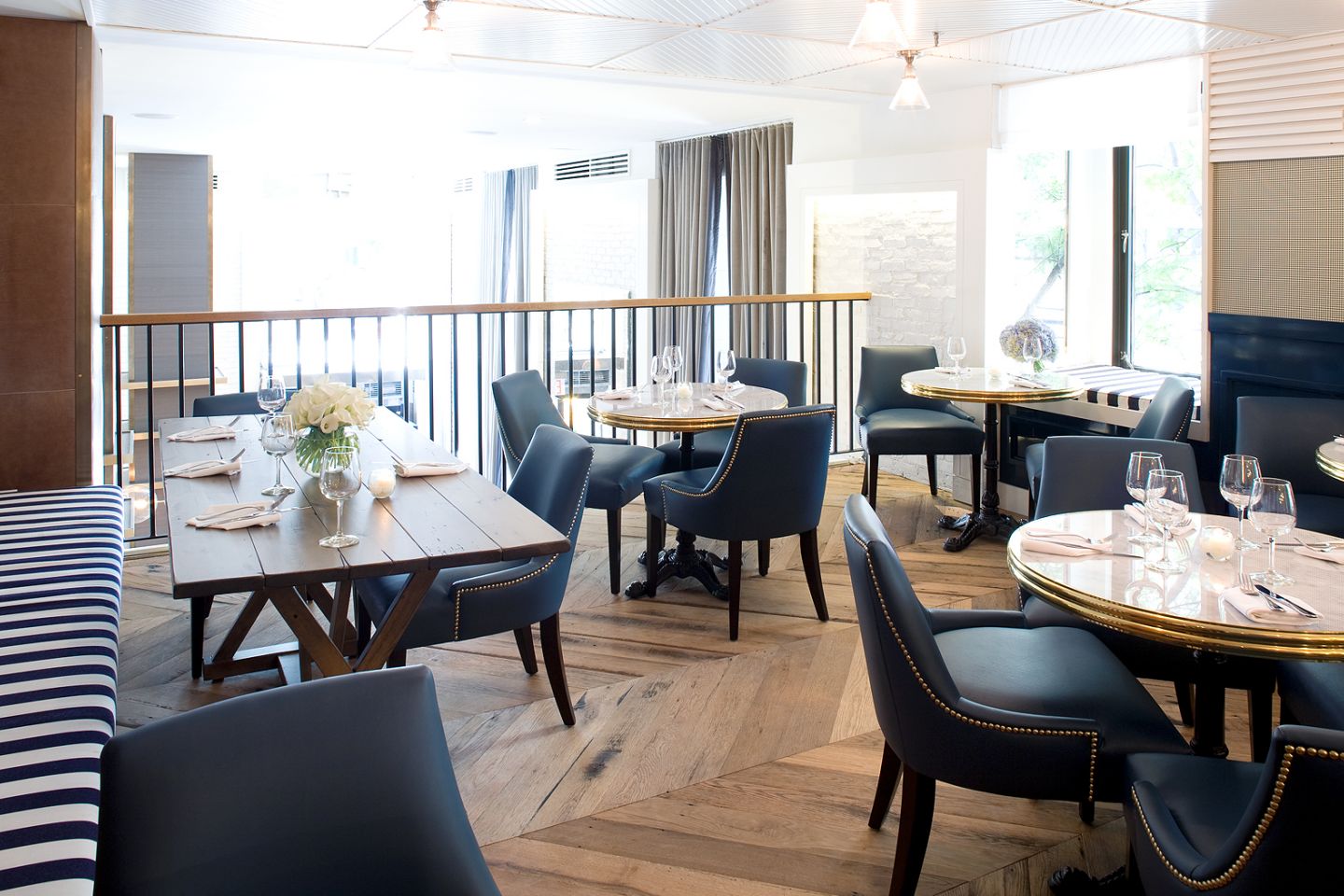 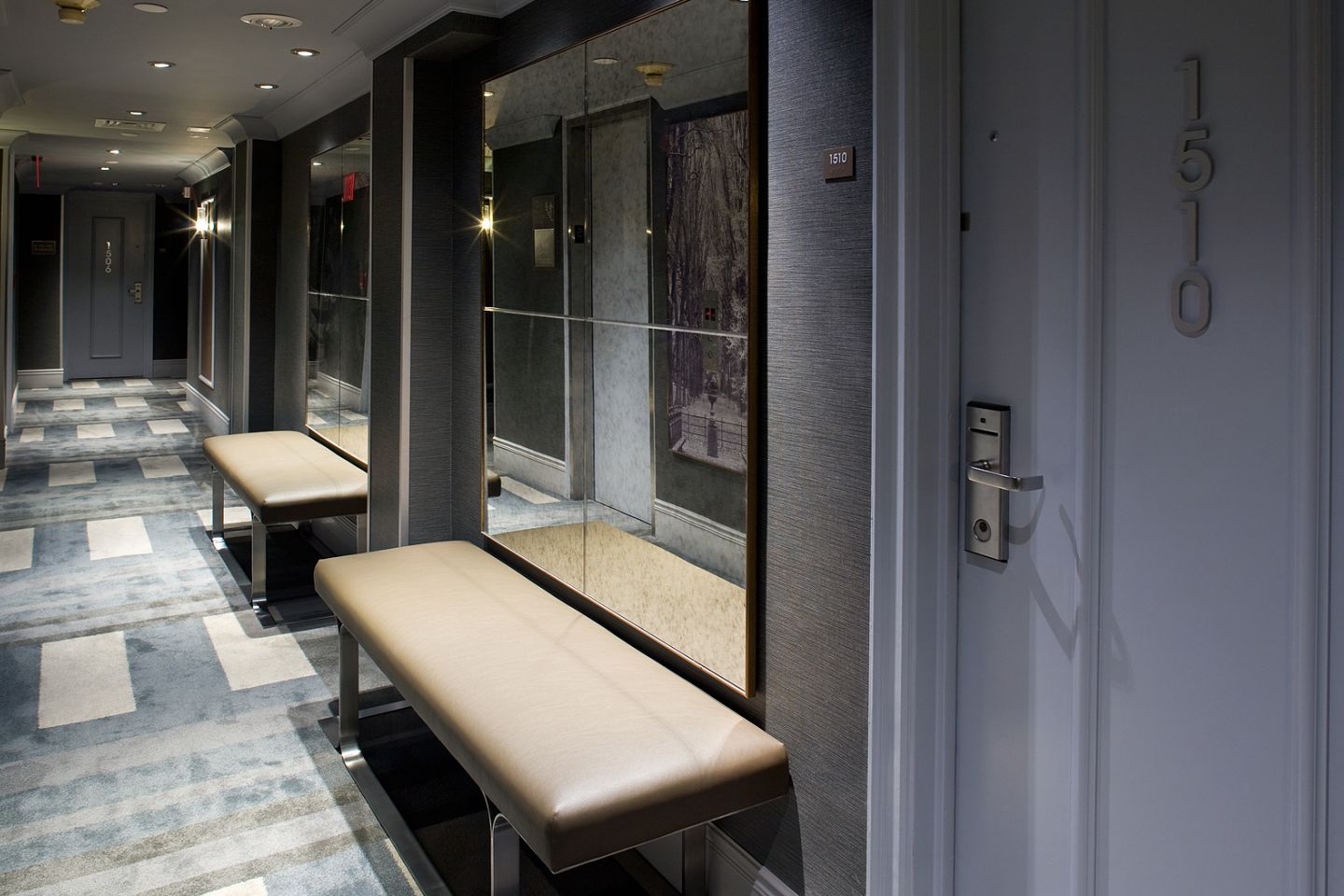 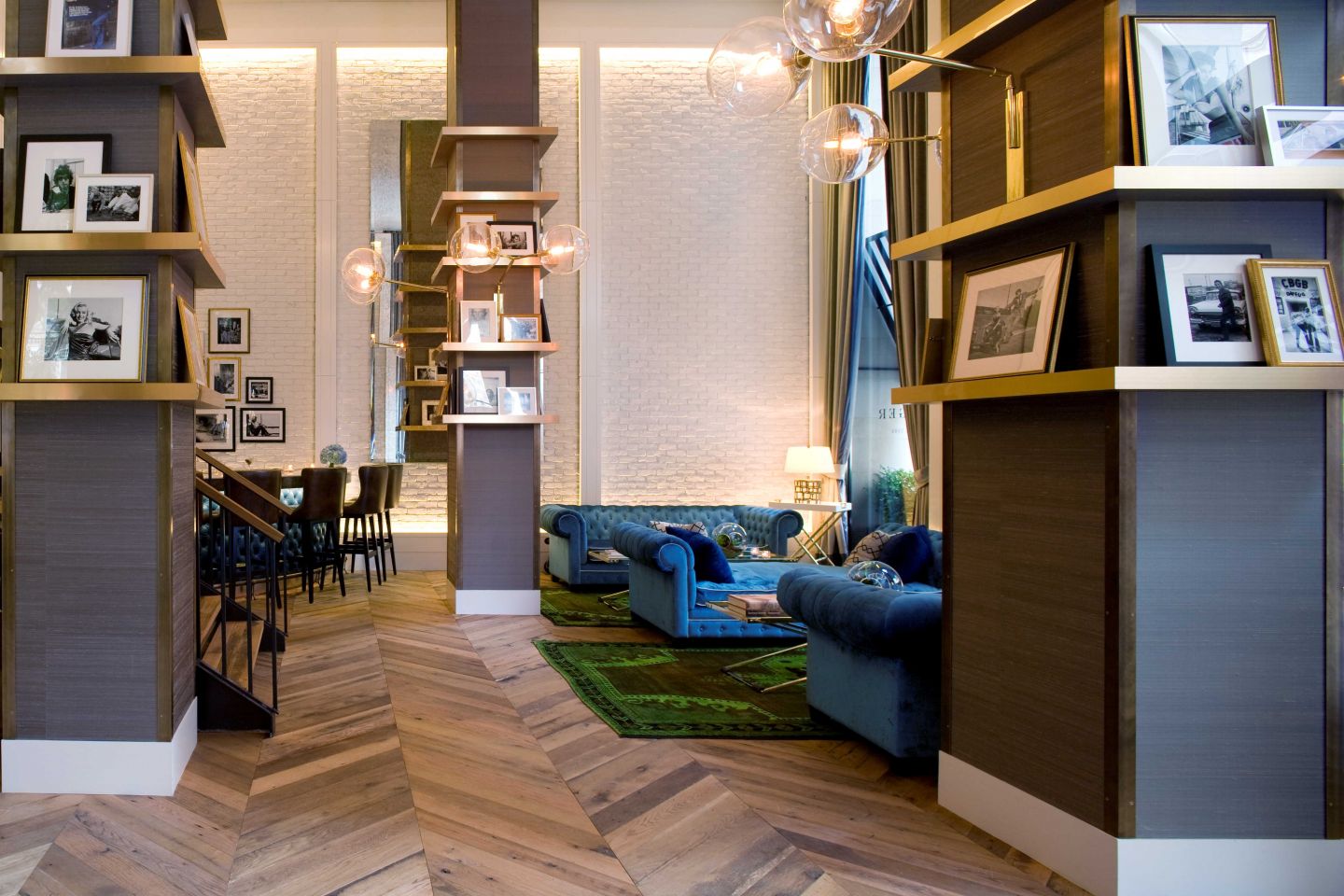 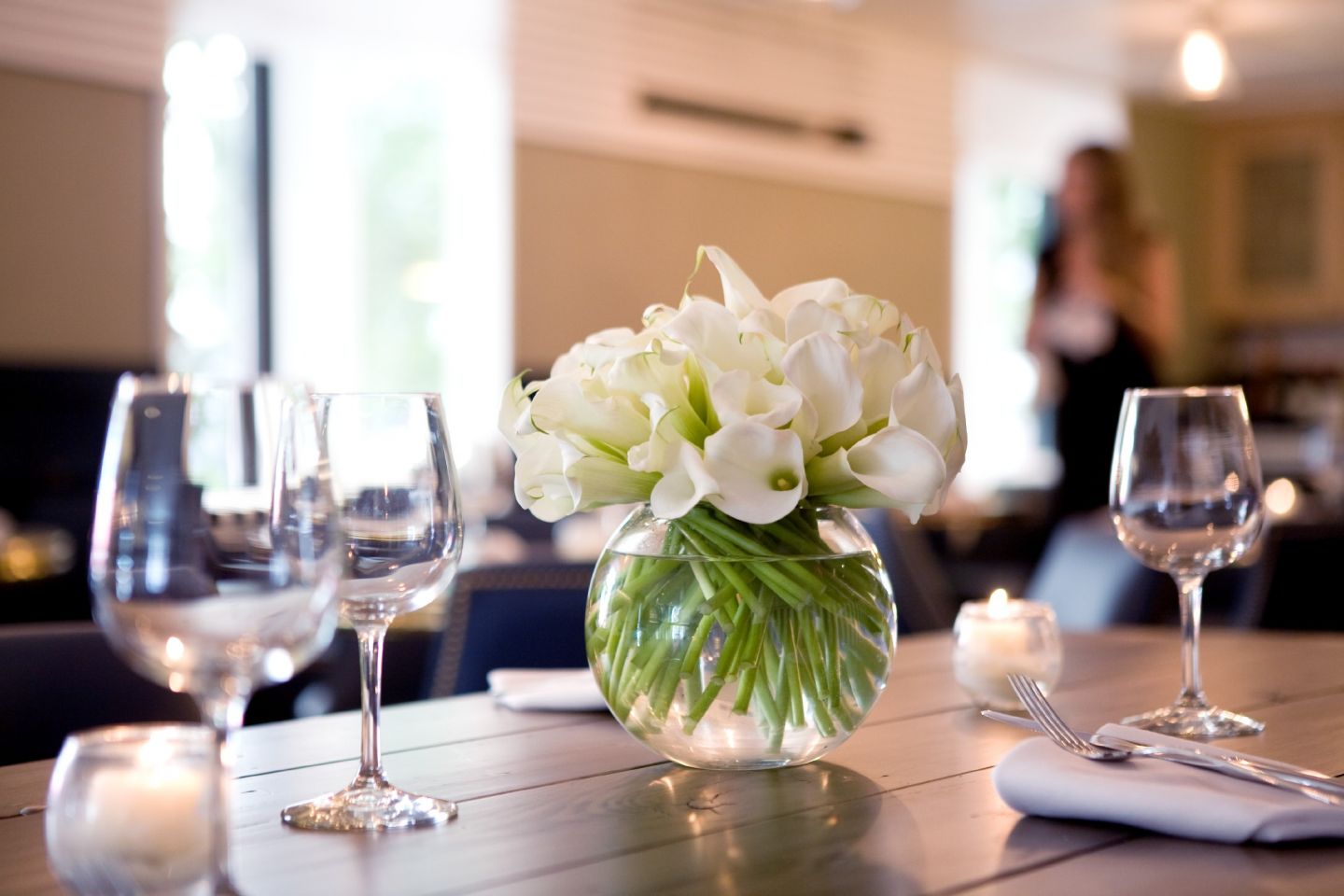 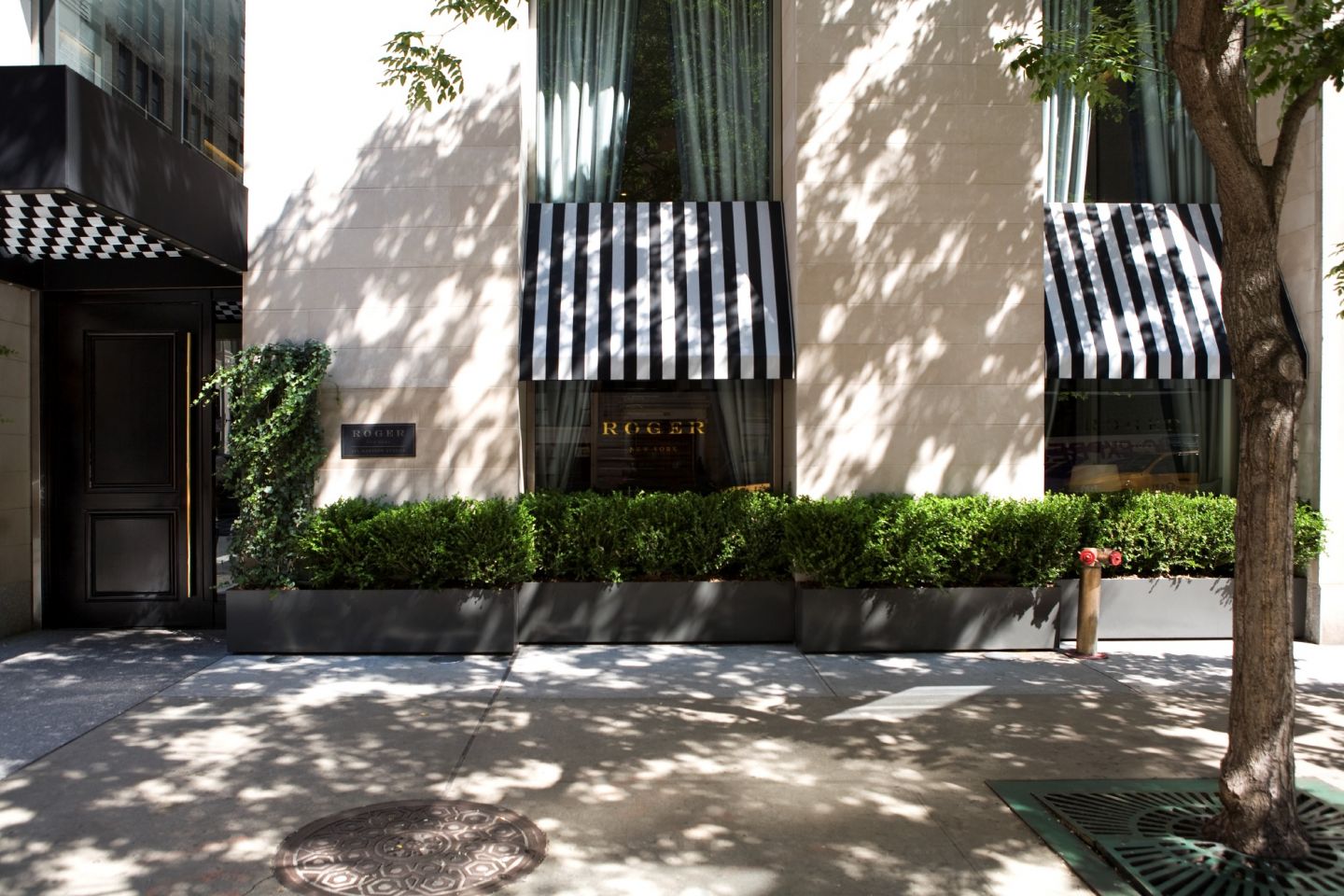 While the rest of New York hurtles head­first into an uncertain future, The Roger stands steady—preferring the pace of an old world classicism cut straight from its own cloth. Formerly known as the Roger Williams, this 15-­story brick hotel opened in 1930 on Madison Avenue and has stood the test of time. Named after a British theologian famed for promoting the separation of church and state in America, and built by Scottish immigrants turned New York architects Jardine, Hill & Murdock, the strength of this place is its past. Thus, despite a recent head-­to-­toe renovation, The Roger hasn’t lost its identity. It has simply evolved. Today, the Madison Avenue outpost sets standards for elegance and style with crisp black-­and­-white striped awnings, pristine landscaping, and fresh new interiors by designers Anna Busta and Annette Jaffe. For starters, the hotel’s cavernous double­height lobby and lounge has been softened with oversized powder blue Chester sofas, gold canopy lighting, and a centerpiece marble­topped cocktail bar festooned with curvaceous leather barstools. The upscale aesthetic continues in the hotel’s 194 guest rooms, which are furnished with royal blue velvet headboards, dark walnut desks, and subtle lighting fixtures recessed into clean white ceilings. Five of the hotel’s suites, including the rooftop penthouse, boast private outdoor garden terraces. Downstairs, the Parlour Bistro stays true to a classic New York menu by sourcing the best gourmet products from local vendors. Cheese plates come straight from Murray’s Cheese Bar in the West Village, bread is freshly baked at Balthazar in SoHo, and fancy caviar starters are delivered direct from Petrossian. The Parlour isn’t going to start a food movement any time soon, but it is, unmistakably and delightfully, very New York. 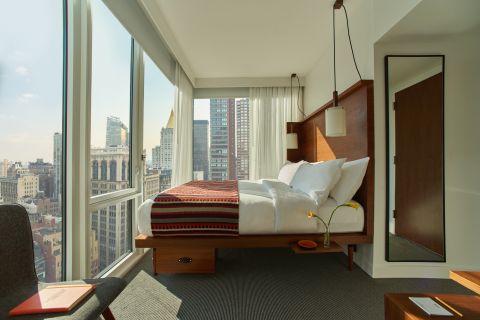 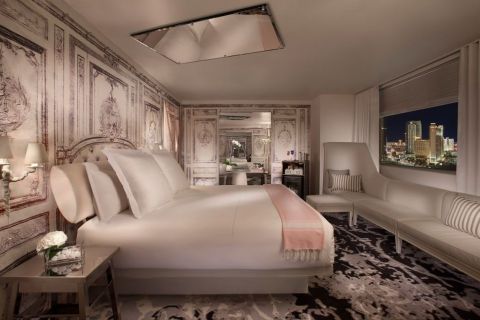 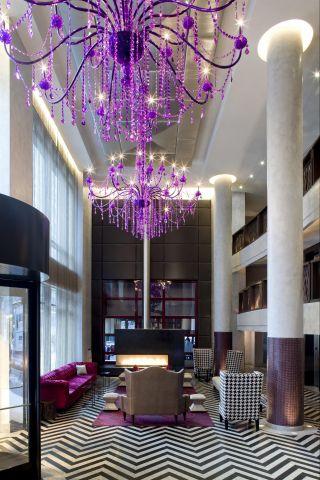